Covert Front is a point and click spy game, where you become an agent code-named Kara and investigate the disappearance of general Karl von Toten.

The plot takes place in 1904 but in a different reality-line, where the first world war has already begun due to earlier technical revolution that took place in the mid 19th century.

Game is divided into four parts, all being chapters of the same story.

No installation needed, it's a standalone game. Just download and unpack it.

Although I am very much a linux fanboy, I can attest to the blessing that is WINE/and having Win10 on dual boot. These games alone are worth it.

So it looks like a lot of your games aren't compatible with Mac on this new platform? :(

You can play a huge selection of Mateusz's games while actively on JAYISGAMES.COM, as long as you download and activate the Adobe Flash plugin.  I just played this title that way just a few moments ago, to test my advice before I gave it to you.  ;)

If someone reads this, I want to make a review of every Mateusz Skutnik game on Itch, so if it is written a long time ago then it will propably be on every one. Every review has 4 topics, Graphic, Sound, Gameplay and Plot.

Graphics of the Third Aesthetic has totally been antiquated when you see PNCE. That game shows off the potential.   But when you compare it to a room escape game, it totally destroyed it when you compare them. The games intro and mansion are so near perfectly done. I say near because I know they will be updated in the legacy game maker version. The game is so important to me, I played it back in the winter of 2007. And as a little kid it impacted so much and showed me art and beauty in one of it's most purest forms. And then compare it PNCE. I have to give it a lower grade because I know it could be improved and should be. Mateusz said he wants to make Submachine: The Legacy kinda the same because it should be historical. But I realy hope he near-redraws Covert Front. I mean, it is kinda a shame it isn't behind a paywall. Because I would love people to have the MP3's of the game but I think it deserves the respect. I give the graphic disign a 7,6/10

The Sound AFX and the Soundtrack have an impact. It is a shame the game has the same walk effect ever time you move. I also think in the game maker version some effects could be better. Such as the sound the door makes before you open it. It makes sence for the broom closet, but not for the iron handles in the normal rooms. The Brian did a real good job at the soundtrack, but it simply lacks tracks. I hope he will make more when the legacy is made, but I also think thumpmonks should with some fine tuning and carefulness improve the game. I give the sound FX and Soundtrack a 6,8/10

The gameplay is a bit to easy. I know, it took me 2 years to beat it. But I was 9 so you gotta give me that :D I love the clock in the painting. And the crowbar ending. And the way you open the mansion door, but it just seems to easy. I know arkade town at the time wanted something easier. But it should be fixable since you broke up with them. I give the gameplay a 7,8/10

The plot of the game is good. But the Manfred note is a bit low quality. It could have so much more to it. The way Kara jumps over the fence is absolutely great. I shows off her badassness in the intro itself. Breaking the crowbar, opening the secret room, it is worth a 9,5/10 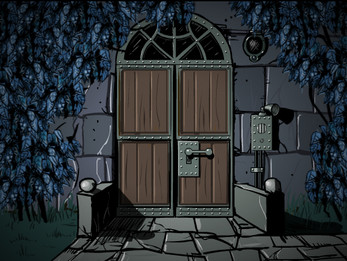